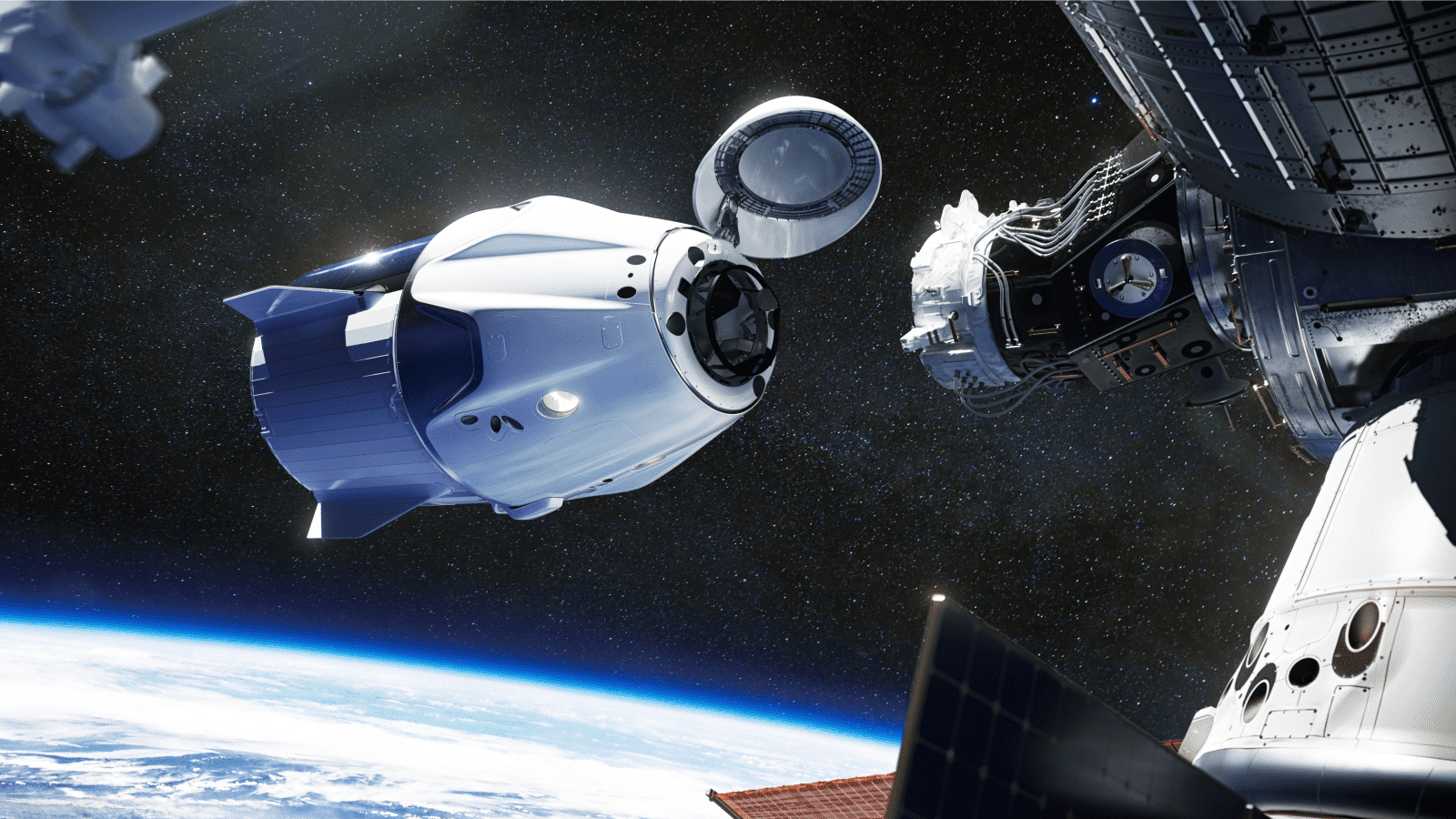 However, while the stock isn’t available to private investors, we’ll look at key reasons why it should still be on your radar.

The company has come a long way since its humble beginnings. In 2015, Elon Musk was almost reduced to tears after an interviewer mentioned Neil Armstrong’s disapproval of SpaceX — few people could have predicted that the company would eventually be taken seriously by the likes of NASA.

If you’ve found yourself drawn in by the lofty goals and cult appeal of SpaceX, you’re not the only one. But there’s also a lot of misunderstanding surrounding the company, its services, and how to invest in it.

Make sure you know these seven things before you go any further!

1) SpaceX is Aiming for Mars

Everyone knows SpaceX has something to do with space, but do you know exactly what its mission and projects entail?

Let’s start from the very beginning. Elon Musk founded Space Exploration Technologies (yes, that’s its full name) back in 2002, and he’s been the chief executive officer ever since.

Naturally, SpaceX has a long way to go before it accomplishes its ultimate goal. In the meantime, the company designs and manufactures aerospace equipment, space exploration technologies, and rockets — and sends them into space (sometimes with a little help from its friends, as seen in #2).

One key aspect that differentiates SpaceX from space exploration efforts that have come before is its dedication to reusable spaceships — this fits nicely with the sustainability efforts Musk has made with his other company, Tesla.

The firm has already had some major wins, such as the launch of Starlink satellites, which may soon offer internet access from anywhere on the planet.

2) SpaceX Has Partnered with NASA

Considering the dismissive attitudes of major figures in the space industry like Neil Armstrong, you might assume SpaceX is a certified outsider with no hope of catching up to bigger names (aka NASA). Not quite.

The two organizations have actually been working together, and in May 2020, they launched the first human flight in spacecraft made by a private company ever.

It was also the first spaceflight made in the US and using a US-made vehicle in nine years; previously, NASA worked with Russia (which held the spaceflight monopoly).

This partnership was beneficial for both parties (and possibly the world at large). NASA helped fund the expedition and offered guidance, and SpaceX had plenty to gain from working with such an experienced and knowledgeable organization.

Meanwhile, NASA reached the International Space Station (ISS) without help from another country for the first time in many years. When NASA worked with Russia, it had limited access to their laboratory and could do little about any issues with the equipment or vehicles.

Talk about a game-changer!

3) SpaceX is More Efficient Than NASA

The argument has long been that it’s preferable for the space industry to be left to the government since it can act in the country’s interest instead of thinking solely about profit. That’s partly why figures like Armstrong opposed the idea of SpaceX in the first place.

However, the advantages a private company like SpaceX offers are undeniable.

It costs SpaceX $90 million to launch a rocket — while that’s a lot of money, it’s significantly less than the $380 million its rivals typically charge for the same thing.

What’s its secret? For one, it manufactures almost everything in-house instead of having to pay over the odds for another company to handle those processes.

It can save up to $95,000 on each piece of radio or communications equipment it develops. In addition to saving money, this also increases the speed and dynamism of operations.

Secondly, as a public organization, NASA has to comply with far more regulations and bureaucracy. Maybe it’s in the best interest of everyone involved, but it’s also pretty cumbersome.

4) It’s Not The Only Private Space Company

SpaceX might have been the first private space exploration company to achieve anything of note, but it’s not the only one in the game. That’s right, Musk has some competitors!

Jeff Bezos has his own private space company called Blue Origin. And, as the world’s second-richest man, Musk certainly has some competition here in terms of funding capabilities.

Even more surprisingly, Blue Origin was founded in 2000 — before SpaceX. Plus, it also focuses on reusable launch vehicles and has had a few successful launches (but not on quite the same scale).

Other competitors include Richard Branson’s Virgin Galactic (currently the only publicly listed space company) and United Launch Alliance, which was born from an alliance between Boeing and Lockheed Martin.

However, none of these competitors have had a partnership with NASA yet, so it’s safe to say that SpaceX is the market leader.

If you’re excited about what you’ve learned about SpaceX so far and have checked your bank account to decide how much you can afford to invest in shares, I’m going to have to stop you right there.

So, will Elon Musk make SpaceX go public any time in the future? For the most reliable answer, you’d need to ask him yourself, but there are many reasons he might be planning an initial public offering (IPO).

Space exploration isn’t cheap, and there are plenty of individuals or organizations in the world that would be happy to invest in something as pivotal as reaching Mars. An IPO would make perfect sense to make that goal happen faster.

But then again, Musk is known for being independent-minded, and he’s not exactly short of money himself. It’s possible that he’ll opt to continue funding SpaceX himself to retain full control — he currently owns more than 50% of its shares, giving him significant ownership.

6) SpaceX Has Some Impressive Investors

Although you can’t buy SpaceX shares, there are plenty of private individuals and companies that have been able to invest in the company through personal invitation or funding rounds. Not to rub it in your face or anything.

Plus Musk himself, of course. You couldn’t ask for bigger names than that!

Now, the company has a valuation of a massive $74 billion. Its shares are now worth around $419.99 (although of course they’re not available for the likes of you and me).

All this is great news for anyone hoping to invest in the company in the future, or who simply wants to see Musk achieve his dreams.

7) How to Invest in SpaceX Stock (indirectly)

Since SpaceX isn’t publicly traded, you can’t buy shares. Unless you happen to have access to a way to buy shares privately — forgive me for assuming that’s not the case.

However, if you don’t mind being a little creative, there are a few ways you can expose yourself to the space industry, and even SpaceX itself.

Since SpaceX investors own shares of the company, buying the shares of those companies is sort of like investing in SpaceX. Purchasing shares of Alphabet Inc (the parent company of Google) will expose your portfolio to SpaceX — meaning that, when the company does well, its value will increase.

Naturally, it’s not quite as satisfying as owning the stock, but beggars can’t be choosers.

As mentioned, the only publicly-listed space company currently is Richard Branson’s Virgin Galactic (SPCE), so this is the only way to invest in the space industry more directly.

Or, if none of those tickle your fancy, you might prefer to save your money and wait for the right opportunity. Who knows, maybe Musk will make the company publicly traded before he conquers Mars.

To the Moon (in more ways than one)

Disappointed you can’t yet invest in SpaceX (at least, not directly)? Patience is a virtue — see this as an opportunity to inform yourself about what you’re getting into before you take a leap of faith.

For now, we’ll just have to sit here twiddling our thumbs until we can get involved and hope that there’s still plenty of room for growth when it’s made available.

Look at the wider picture. Within a few years, we might be reminiscing about the days when SpaceX wasn’t publicly traded while enjoying a glass of champagne on Mars. I’ll see you there!

Tim Thomas has no positions in the stocks, ETFs, mutual funds, forex, or commodities mentioned.