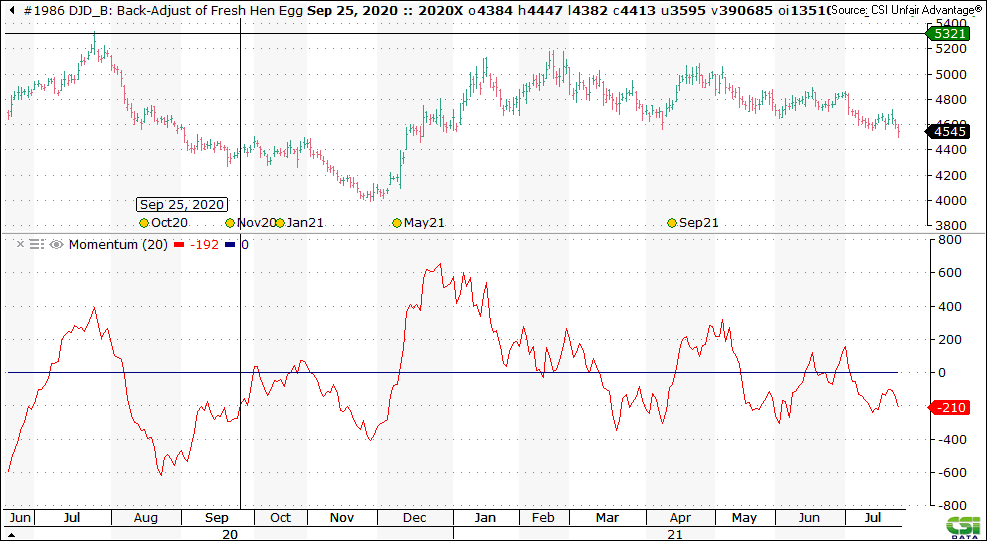 I’ll start by explaining what momentum trading is, why you might include it as part of a swing trading strategy, and then I’ll show you the results of some momentum-based backtests.

For this article, I did three backtests across three asset classes, stock, commodities, and cryptocurrencies. I used a different momentum trading strategy on each, and while the results were positive, it was the cryptocurrency strategy that has outstanding returns but we’ll come back to that.

So, thinking back to your science class at school, where P is momentum. By multiplying the mass of something by velocity, we get momentum. And that’s the basic premise of momentum when it comes to the markets.

High numbers indicate the price is quickly increasing or decreasing value. Quick is a relative number to what’s happened before. It’s not relative to other instruments, other stocks, or other commodities. It’s relative to the price itself of that particular instrument.

Most charting packages include momentum as one of a range of indicators. It’s easy to eyeball what momentum is doing.

The traders I know who incorporate it into their trading do so as a confirmation of price.

As price increases or decreases in value, the swing trader should see momentum confirmation with a new high or new low.

The image below is the price chart for the London Cocoa futures contract. However, as I’ve written elsewhere it could be the price chart of Tesla stock or Microsoft stock. It doesn’t matter; the basic principle of what I’m trying to explain is the same.

At the bottom of the image is momentum. On both price and momentum, I’ve circled key inflection points.

As you can see, as the price increases, so does momentum. As the price falls, momentum falls as well. So, momentum confirms what price is doing.

As price is broken into new highs (as marked by the top blue circle), momentum also moves into a new high.

Afterward, the price drops back and in late December, we start of range-bound trading which continues until late February. During this period, there’s no clear direction in the price. Momentum also lacks a clear direction.

Into February, the range becomes smaller and smaller until eventually, price breaks higher to reach an area shown in the top red circle.

This circles marks the highest price point seen on the chart however, momentum doesn’t follow. Momentum reaches a high point, but it is still below the previous momentum high seen in November.

For swing traders who bought cocoa futures in February when the price broke about the trendless area, the disparity between price and momentum would be a red flag.

It would be seen as a warning that the uptrend may not be sustainable. If they hadn’t already done so, they might well have sold some of their position.

So, you have to think of momentum, rather like a car accelerating to traffic lights. When the traffic lights turn red, the car driver presses the brakes to slow the car.

Although the car is still traveling towards the traffic lights, its speed decreases; the direction is the same, but the force of the car has changed.

This analogy can be applied to the price.

Momentum can be a Confirmation Indicator

As price increases or decreases, the swing trader wants to see this change mirrored by momentum. In this way, momentum is a confirmation of what you’re seeing in price in the price chart.

Rising or falling momentum can be a box that’s ticked prior to the decision to trade. If your trading system signals a buy or sell, momentum can confirm that signal.

The above chart is another example.

Its the price chart for the Soybean Oil futures contract traded on the CME exchange in Chicago.

As the price continues to make new highs, so does momentum. However, in mid-May, a disconnect starts.

I’ve circled the inflection point, but it should be clear that momentum appears no longer tied to price.

While price continues up, momentum starts to move down.

For swing traders, this should be an early warning something is up and the uptrend party is about to get busted.

How can we use the car and traffic light analogy to think about the markets and price?

The basic principle of the first backtest was the premise that buying an ETF of a country’s equity index that had previously performed well would produce profits.

A portfolio was created of a variety of ETFs from those in Europe, Asia, South America, North America. This was a long-only strategy.

The strategy worked by examining the performance of these ETFs in the prior month.

Only the top five performing ETS of the prior month are bought and the strategy only traded once a month.

The performance of the strategy was positive, it was a reasonable return but not exceptional. It would have returned 5.3% on your capital however, the drawdown depth will probably put you off.

I did the backtest without any stops so it’s not surprising the drawdown (the percentage change from the account’s high to the account’s low) was 63.6%.

The backtest is still useful; It demonstrates the principle of how the swing trader can use the concept of somethng that’s previously performed well, and assume it will continue to perform well.

Backtest #2: Momentum in the Commodities Markets

The second backtest was done on the commodities market. It consisted of a portfolio 30 markets available on the CME and ICE futures exchanges.

The commodities included corn, wheat, oil, cotton and cocoa. Unlike the ETF strategy above, this was a long-short strategy.

The principle of the strategy was the assumption that whatever happened in the prior 12 months will continue to happen.

Like the ETF strategy, this strategy trades only once a month using a rolling 12 month period prior. So every new month the strategy ran, the 12 months would have shifted forward by one.

Over the 20 year test, the returns were a little disappointing. At one point the hypothetical starting equity of $100,000 increased to over $400,000. However, that soon fell back. The credit crisis of 2008/09 appears to have been the start of the strategy’s lower returns.

The annual return of 1.87% and large drawdown of 70% would put off most traders. However, you could research how using stops (which the strategy doesn’t do) improves the performance.

For the final test, I researched a cryptocurrency trading strategy which uses momentum, carry and value as three inputs as part of the algorithm.

I’ll go into value and carry in another blog post but unlike the previous strategies, the results of this backtest proves that momentum can be as part of a trading strategy.

The compound annual return of this strategy is 43.38% but with a deep drawdown of 47.2%. Like the two previous strategies, no stop was used so it’s likely the performance would improve further.

The backtest I’ve included here are here for information only and to show the process of evaluating an idea and to prove or otherwise any assumption you might have.

Used by itself in a trading strategy, the result suggests it gives less than average results.

However, it has a place and when used as an indicator to support the trading decisions or when used in combination with other approaches in a swing trading strategy.