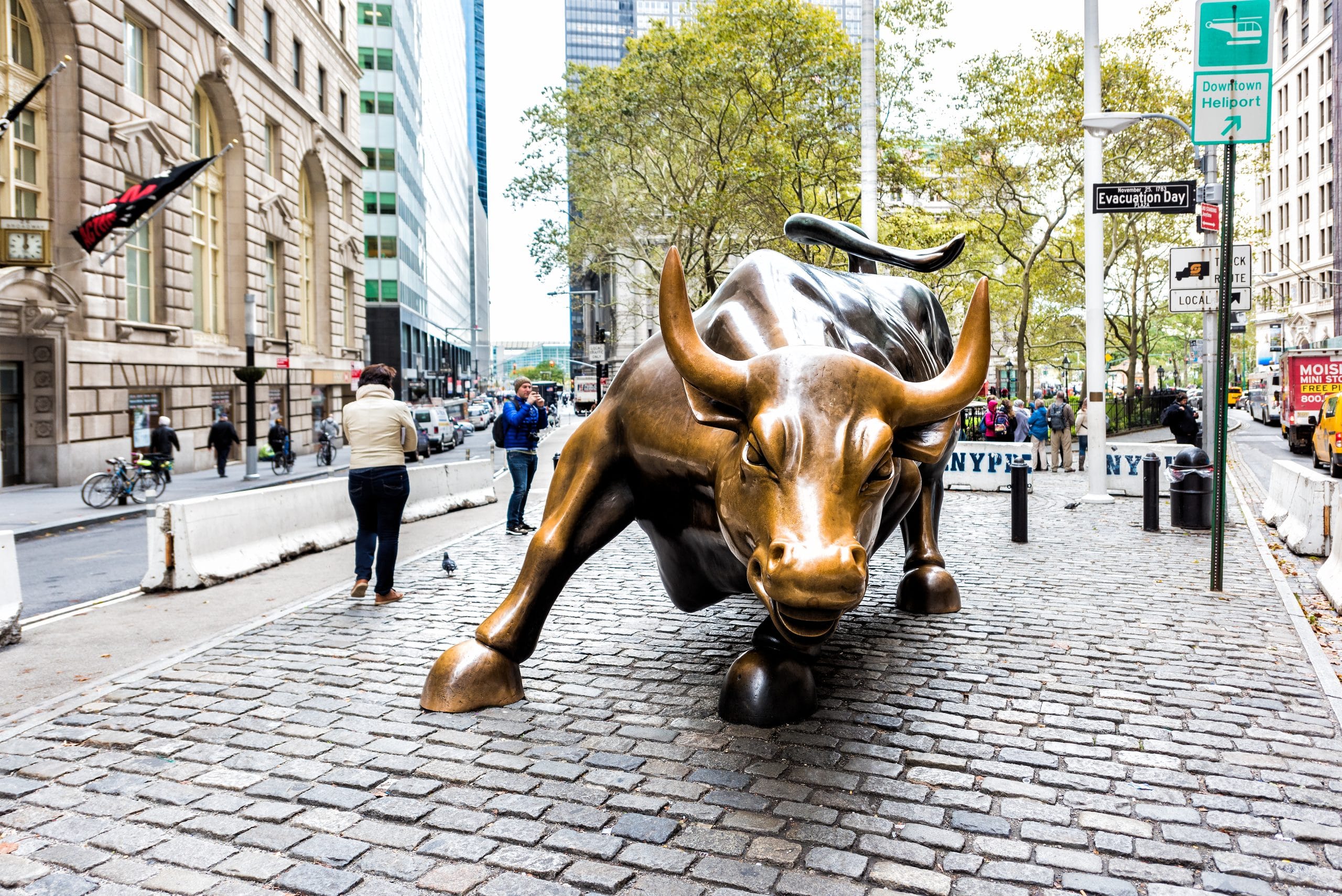 While some swing traders might specialize in swing trading stocks, options or commodity futures, this post will focus on trading bullish chart patterns as part of a forex trading strategy.

The Lower Risk Way to Get into a Strong Bullish Trend

The lower risk route is to take advantage of the consolidation periods that almost always occur during sustained moves in price.

At some point during an uptrend, for example, there will likely be a sell-off as earlier buyers take profits. But if the overall market sentiment remains bullish, new buyers will see this as an opportunity to get in on the trend.

The resulting conflict between bearish vs bullish forex traders commonly leads to one or more of a number of potentially profitable set-ups. These are collectively known as bullish continuation patterns.

All these forex chart patterns have their distinguishing features, and I’ve set out below exactly how to recognize and trade them.

But far more important than the details of the particular set-ups is to realize the potential pitfalls of trying to trade any kind of consolidation move.

Whether they’re looking at a 1 minute, 5 minute, 1 hour, or daily chart, waiting for price to break above a resistance level is a test of any trader’s patience. The fear of missing a big move fuels a powerful urge to buy. But it’s a temptation that needs to be carefully managed.

Battles between bulls and bears all too often produce false breakouts, trapping the unwary. And it’s therefore crucial to wait for confirmation before entering any of these kinds of trades.

So, keeping that in mind, let’s get into the patterns themselves.

Bull flags are one of the commonest continuation patterns and are seen frequently on charts of all instruments and time frames.

If we were trading stocks, for example, the Nvidia tech company has displayed a strong bullish trend throughout almost the whole of 2020. And it’s provided many opportunities for sharp-eyed traders to get in.

The classic pattern features a large bull candle, supported by high volume – the flagpole. This is followed by three or more, smaller consolidation candles tracking horizontally across the chart – the flag.

These consolidation candles typically include dojis and hammers. But the more important thing to note is the horizontal track that signifies that neither the bulls nor the bears are currently in control.

And since the bears are proving able only to pause, rather than reverse, the uptrend, the most likely outcome is that the trend will at some point resume.

In the typical case, this occurs when price approaches one of the popular EMAs, such as the 9, 13, or 20, since these indicators are very commonly used by traders as lines of support and resistance.

But no matter what indicator we’re using, when trading a bull flag pattern, the key is to buy as close to support as possible.

As tempting as it is to get in early, and as frustrating as it is to miss an upward move, consolidation candles frequently display long wicks (shadows), indicating the “fake-outs” that likely trapped and stopped out many unwary or over-enthusiastic traders.

So for safety, we should wait for confirmation that the uptrend has resumed and look to enter if price breaks above the close of the flagpole candle. This entry also allows for a tight stop loss, placed at the close of the first consolidation candle to close below halfway up the flagpole.

The main difference is that the pennant consolidation candles form a wedge or triangular pattern within two mini-trendlines.

As with bull flags, the pennant consolidation candles tend to track towards support levels, typically an EMA line; and it’s again very important to buy as close to those levels as possible.

Somewhat similar in appearance to both flags and pennants, these forex chart patterns are distinguished by price trading within a defined range during the consolidation period.

Typically, price will make two, three, or more touches on both horizontal support and resistance levels before breaking out to the high side.

We can then look to trade the breakout by waiting for the first candle to close above the resistance level, and a safe stop loss will be at the midpoint of the range.

Another very common bullish continuation pattern, the ascending triangle is formed by two trendlines. The upper line is broadly horizontal, indicating that price has been testing, but has not yet been able to break, a key resistance level.

The lower line is an ascending diagonal, formed by price hitting a series of higher lows. This indicates that the bulls are in control and that pressure on the resistance level may soon produce a break above it.

This pent up demand can produce a dramatic and profitable increase in price once resistance is broken. But fake-outs are unfortunately also common.

Waiting for a confirmation candle to close above the upper trendline is a sensible precaution, but it’s also important to make sure that this candle is supported by high volume.

Stop losses are often placed just outside the triangle, directly opposite the breakout, and this means that the best and safest setups occur when the break out happens close to the apex of the triangle. But as with all forex chart patterns, the perfect formation is a rarity.

An alternative, looser, stop-loss placement is at the intersection of a horizontal line drawn from a point halfway along the base of the triangle and the lower trendline.

As the name suggests, symmetrical triangles are neutral rather than bullish or bearish in themselves.

As price approaches the intersection of these lines – the apex of the triangle – a breakout becomes increasingly likely, and it may be to the high or low side.

But as with all these consolidation patterns, the breakout will more often than not be in the direction of the existing trend.

By definition, though, as price approaches the apex of the triangle, candles will get smaller and smaller, and a close above the upper trendline will not in itself be enough to confirm a breakout.

For safety, we should look for the breakout candle to be supported by high volume. We should also refer to indicators such as EMAs, RSI, and MACD, and place a tight stop just below the lower trendline

Less immediately obvious than flags, pennants, or triangles, the cup and handle is still a very common bullish pattern.

In the classic setup, the left lip of the cup is the point at which price starts to retrace after a strong bull move.

Price falls and then begins to consolidate, creating a flat or U-shaped bottom to the cup, before climbing back to create a right lip at a similar level to the left. Price then tracks horizontally or slightly downward to form the handle.

The left lip, right lip, and the handle forming at the same or a very similar price is a good indication of a strong resistance level.

However, the U shaped cup shows that the bulls have re-entered the market after the drop in price from the left lip, and are likely to try and push prices higher.

As the bears resist, consolidation candles form a handle, but bulls expect that buying pressure will trigger a breakout.

The first candle to close above the left rim of the cup is a good entry; the low point of the handle is usually a safe stop.

That said, the shorter and closer to the horizontal the handle, the stronger the resulting bull move is likely to be, and the tighter the stop.

Conversely, a longer and downward sloping handle that takes price close to or below the two-thirds or half full level of the cup is a sign that the pattern has ceased to be valid.

Deciding exactly when this point has been reached is a matter for the individual trader’s judgment. This is based on practice and experience and, of course, none of these patterns are infallible.

But it is worth noting that the cup and handle pattern tends to be slow to develop. There will often be other tradeable patterns that develop within it.

With practice and experience, all of these forex chart patterns can provide useful indications of future price movements.

But it’s important to understand that they will seldom if ever look exactly like the diagrams in the textbooks.

Therefore, successfully trading them is much more about understanding the price action that produces them than scouring the charts for picture-perfect set-ups.

Even more vital is to use other indicators for confirmation of the move.

As always, the most crucial thing is to practice solid risk management; Only take those trades that offer a good risk to reward ratio and do so with appropriate stop losses.